The twentieth century was littered with examples of hopes and fears of impending robotic domination, 15 years into the 21st century the feeling remains. Whether we’re really on the brink of the next stage of electronic evolution remains to be seen, but one thing’s for sure, the dream continues to occupy the minds of scientists and engineers around the world. With the subject making tech headlines and following the launch our very own partwork robot, Robi – it seems fitting that we take a look back at the history of robotics and the rise of the machines.

What is a robot?

Not be confused with automata, which have been around since Homer (of Odyssey not Simpson) coined the phrase, Robots can be defined as machines guided or programmed via electronic circuitry. However, a consensus remains elusive with many maintaining their own view of what they would call a robot. The distinction appears to around intellect and the definition of what is “alive” – something which was the subject of 80s blockbuster Short Circuit and will no doubt occupy our philosophy for years to come.

Since Czech writer Karel Capek first used the word in 1921, our fascination with Robot technology has spread like wild fire. With uses in almost every corner of society, robots now occupy roles in manufacturing, entertainment, military, domestic service and elsewhere.

Post-war Bristol saw the birth of the first autonomous robot, created by American born “Robotician” William Grey Walter in 1948. General Motors were the first to implement a digital, programmable robot in 1961 after its invention by George Devol in 1954. The motor company put the technology to work lifting hot metal in their New Jersey factory.

While the field of robotics has had an enormous impact on industry, it’s popular culture that many of us look to for our references. From Metal Mickey to Michael Jackson, media moguls the world over feed our appetite for mechanisation. Rocky’s Paulie had one, Robocop’s Alexander James Murphy became one and Optimus Prime pretends not to be one – at least some of the time.

While the prospect of Terminator’s Skynet looms large in our collective consciousness, recent films such as Wall-E offer a more positive view of the future of robotics and newly released Chappie, once again questions the distinction we make between robots and “beings”.

As model builders, we find joy in taking the time to create things for ourselves – so how can the next generation of electronic pseudo-slaves help us? We’ve got our hands on the Robi the Robot partwork. Created by Tomotaka Takahashi, Robi is a walking, talking, dancing robot from Japan – the beauty of which being that we can build him ourselves, satisfying our seemingly inherent human interest in robots and our desire for scale modelling! For more on Robi, take a look at our website: http://www.model-space.com/gb/build-your-own-robi.html

What’s your favourite part of the robotics story? Let us know in the comments below… 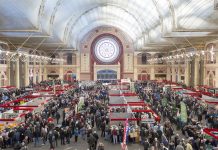