Search the blog
Home Military A Wartime Legend: Stories Behind the Spitfire

A Wartime Legend: Stories Behind the Spitfire

An iconic military aircraft from a bygone era, the Supermarine Spitfire is etched into the memories and imaginations of generations, its story a long and illustrious one. From its humble beginnings to the Battle of Britain exploits and beyond, tales of the Spitfire have been told for over 75 years.

In a bid to truly capture the history and aura that surrounds this beautiful plane, we’ve prepared some stories to kick-start our exploration of its fascinating life.

The taste of combat proved sweet for Deere, and in the space of one week he took down a total of six Luftwaffe

The Supermarine Type 224: A Disappointing Start

Before it was the iconic machine we know today, the Spitfire began as the Supermarine Type 224, a gull-winged monoplane with a fixed “trousered” undercarriage and a 600HP Rolls Royce engine.

Before it had even left the runway the plane was labelled a disappointment by its designer, Reginald J. Mitchell. His prediction proved correct, with its initial maximum speed of 228 mph (367 km/h) and 9.5 minute duration to climb to 15,000 ft (4,600 m) well below expectations. Despite its shortcomings, the experience gained from the 1934 flights paved the way for the Spitfire’s eventual development and success.

1940. The Commanding Officer of 74 Squadron is shot down and forced to land in Calais-Marck, sparking a rescue mission on May 23. Responding to the call, a Miles Magister two-seat trainer escorted by two Spitfires arrives safely in Calais. Mr Deere is one such Spitfire pilot, lacking any real combat experience.

Tragedy strikes. As the Magister takes to the air just after take off, twelve Messerschmitt 109s descend. Under heavy fire, and with the success of the mission slipping away, Deere and his fellow pilot fight back. Outnumbered and outgunned, the Spitfires scramble effectively, taking down two of the Germans and warding off the others to guide the Magister to eventual safety.

The taste of combat proved sweet for Deere, and in the space of one week he took down a total of six Luftwaffe (German air force), thus becoming the first RAF Spitfire pilot to achieve ace pilot status. He finished the war as New Zealand’s second-highest-scoring air ace – behind Colin Gray – with 22 confirmed victories, 10 probable victories, and 18 damaged.

In 1934, during its developmental stages, the Spitfire was armed with eight .303 Browning machine guns, each with a 300 round capacity. This level of munitions was chosen to counter the idea that plane speed would limit the number of combat opportunities, therefore increased rounds would lead to a better chance of combat success.

But as with any technology, this eight-gun system inherited limitations over time, with bullet size proving insufficient against the heavy-armoured German aircraft. The RAF’s instruction to spread cone of fire for a long range of 365m limited their effect even further, with RAF pilots learning quickly that hitting the Germans at close range was the only way to cause significant damage.

In May 1940, with the Germans developing their own cannon-equipped Messerschmitt Bf 109E-4, pressure mounted on the RAF to find an answer with substantially greater firepower. Lord Beaverbrook was the instigator of progress, throwing his weight behind the concept of the cannon Spitfire.

But this was not a quick-fix solution, and despite several trials and changes of battle tactics over the coming months the cannon Spitfire proved to be a bitter disappointment. The culmination of its failure arrived in its use by the No. 19 Squadron, who were tasked with flying the cannon Spitfire throughout the Battle of Britain. Jammed guns at the moment of striking, spent cartridges lodged in ejection chutes, and flexed ammunition drums resulted in mounting frustrations and the eventual replacement of cannon Spitfires with their predecessors.

Mystery of History: The Curious Case of the Burmese Spitfires

Did you hear the one about the buried Spitfires? Rumour has it that a shipment of some 60 Mk XIV Spitfires arrived in Burma in August 1945, ready for action. Unfortunately their timing was a little off, and with post-war jobs limited to clearing the Japanese from Pacific islands, the planes were considered surplus. With plenty of Spitfires still operational, and new aircraft soon to replace them anyway, the order was made to bury them.

So is this story true, and if so, where are they now? Aviation archaeologist Jim Pearce is credited with giving the story life, after a discussion with US veterans who were given the burial instructions. Jim shared their story with his friend, pilot and aviation enthusiast David Cundall from Lincolnshire, who has since spent 16 years and £130,000 in his bid to find these mysterious machines beneath the Burmese dirt.

Despite following reputable sources, gaining a series of sponsors, and developing strong relationships with the Burmese government which enabled archaeological digs throughout Burma, lack of any hard evidence has resulted in refusal of further Burmese government support for Mr Cundall and a shortage of funding to press for continued digging.

Do these missing Spitfires really exist, or is Mr Cundall chasing shadows? While his commitment and efforts are honourable, the answer is set to remain buried for the foreseeable future.

These stories are but a few of the hundreds that exist, capturing the trials, tribulations, and triumphs of this famous fighter plane. At ModelSpace, we believe in keeping these stories alive for generations to come. Join us on this iconic journey today by building your very own 1:12 scale replica of the Supermarine Spitfire Mk Vb, available here: http://www.model-space.com/gb/build-the-spitfire.html 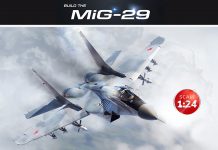