The first ever tank emerged during the first World War, changing the landscape of ground warfare forever. Though they were basic and ultimately unreliable to begin with, tanks have evolved over the decades that followed and have since become the backbone of land-based military options. WWII saw the rise of three giants – the M4A3 Sherman, the Panzerkampfwagen Tiger I, and the Russian T-34/76 – but since the war ended, few tanks have dominated the global landscape more than the T-72 Russian tank.

A Soviet second-generation main battle tank, the T-72 emerged in 1971, and with over 25,000 units built, it has become one of the most widely produced tanks post World War II. With so many rolling across the globe, here’s a closer look at their rise and overall impact on warfare to date. Rising from the T-64’s ashes

The direct predecessor to the T-72, the T-64 (also known as Object 432) was produced as part of an ambitious assignment led by Alexander Morozov, wherein the main goal was to design and build an effective tank which weighed less than 36 tons. Changes were made to achieve this, such as reducing the crew to only three by including an automatic load system, but this led to problems when sourcing a suitable engine to fit the reduced hull size.

The T-72 was thus developed as an “in case of emergency” design, only to be built in the event of war

While production commenced on a 115mm gun in 1964, plans were already underway to construct the T-64A with a stronger 125mm gun. The 5TDF 700 HP engine’s woes proved to be a major hindrance, but significant political support for Morozov stopped the discussion of alternative options. The T-72 was thus developed as an “in case of emergency” design, only to be built in the event of war, but with a 40% reduction in price the T-72 entered production despite Morozov’s stranglehold.

In 1968, the Uralvagonzavod (the company tasked with building Russia’s tanks) produced the first tank with a V-45K engine and 125mm gun, dubbed “Object 172”. Following comparative testing against the T-64A, Object 172 was re-engineered, but it wasn’t until an obscure political decree was issued that the Uralvagonzavod was allowed to commence construction of the first batch of “Object 172M” tanks in 1972. After further modifications and testing, the T-72 was finally accepted into service.

Unfortunately, production difficulties caused by the change over from T-64 to T-72 meant only 30 tanks were completed in 1973, and continued problems left them far short of the state-issued production quota of 440 in 1974, only delivering close to 150. These shortfalls led to an overhaul and modernisation of the factory, finally pushing the T-72 into full-scale production. A compelling discussion of any tank cannot take place without discussing two main features – its armour and its weaponry. The turret of the original 1973 T-72 was made from a conventional cast HHS steel armour, with a maximum thickness of 280mm and a nose thickness of 80mm. The glacis of the laminated armour was 205 mm thick, made of 80 mm HHS steel, a 105 mm double layer of laminate, and 30 mm RHA steel. Furthermore, the interior of the T-72’s hull and turret contain a synthetic boron lining, as part of a significant nuclear, biological, and chemical (NBC) protection system.

As is custom with Soviet tanks, the T-72’s gun is capable of launching guided anti-tank missiles

As far as its attack goes, the T-72 packs a serious punch with a 125mm 2A4S series main gun – a 20mm larger calibre than what you’d find in its contemporary Western main battle tank counterparts, and slightly larger than many modern tanks. In addition, as is custom with Soviet tanks, the T-72’s gun is capable of launching guided anti-tank missiles, and standard ammunition such as HEAT and APFSDS rounds.

To date, the T-72 tank has been used by over 40 different countries, including Algeria, Kenya, Sudan, Venezuela, Armenia, Burma, India, Kazakhstan, Bulgaria, the Czech Republic, Poland, Iran, Iraq, and Syria. The Russian Federation currently has over 5,000 T-72 tanks in use, with approximately 2,000 in active service and 3,000 in reserve. With such a wide global reach, and such a significant impact on land-based military operations over the last 40 years, it is easy to see why the T-72 Russian tank has developed such a strong reputation. Although advancements continue to be made in main battle tank technology, the T-72’s reliability, versatility and power mean it will continue to define armoured warfare for many more years to come.

Do you have a favourite tank or military vehicle? Let us know in the comments, or share your thoughts on our Forum or social media channels. Would you like to build and drive your own T-72 tank? Our new 1:16 scale model T-72 tank is an accurate, remote-controlled replica of the iconic main battle tank! 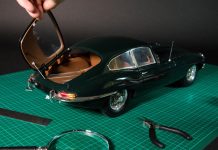 How to Make Model Cars

Brendon Udy -
0
Ford GT’s Success at Le Mans ‘66 – ModelSpace When it comes to US-produced endurance cars, you’ll have to drive a long way to find someone...